At present, there are 3 specialists from CMRC at Kozyavkin International Rehabilitation Clinic, who came to learn the principles of rehabilitation by the Professor Kozyavkin Method. 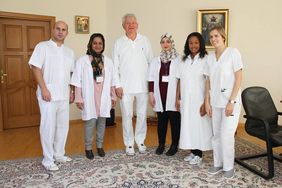 Let us recall that the INRS in December 2017 was officially recognized at the state level in the UAE, which means that from now on the state of United Arab Emirates fully covers the treatment under Professor Koziavkin method for its citizens with cerebral palsy.

This event was preceded by a long and hard way of preparing the necessary documentation, reports and statistical data, which were thoroughly studied and analyzed by a specially created UAE Government Commission. Everything was taken into account: the effectiveness and quality of the treatment approach, its evidence base and scientific developments, patient testimonies, international certification and recognition at the level of other countries.

To this day, dozens of patients from UAE, Saudi Arabia, Qatar, Kuwait, India has successfully passed the treatment by the Professor Kozyavkin Method.

In the near future, it is planned to introduce the technology in other 3 clinics of our international partner CMRC, namely in the cities of Abu Dhabi, Dubai (UAE) and Dakhran (Saudi Arabia).