ABILHAND-Kids is a questionnaire for assessing hand function in children aged 6-15 years. 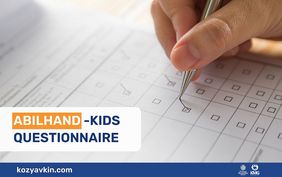 It is filled in by the child's parents and assesses the difficulty for the child to perform 21 daily actions with their hands. It takes up to 10 minutes to complete the questionnaire.

The questionnaire was developed in 2004 by a group of Belgian researchers from the Catholic University of Louvain leaded by Carlyne Arnould. The basis for ABILHAND-Kids was the ABILHAND adult questionnaire. The development and calibration of the questionnaire was performed specifically for children with cerebral palsy. ABILHAND-Kids can be used for children with any form and severity of cerebral palsy. The only exclusion criterion is the presence of a significant intellectual deficit (IQ <60).

Tasks for two hands, in turn, are divided into three groups.

Each task is assessed as "easy", "difficult" or "impossible". When assigning an assessment, keep in mind that the complexity of the tasks is assessed for the child without any outside or technical assistance. If during the last 3 months the child has never tried to perform one of the tasks, it is not evaluated, and the "?" is put in the form. However, if the parents know that the child is not trying to perform this task because it is too difficult, the assessment is "impossible".

A team of our scientists translated the questionnaire into Ukrainian, performed its cross-cultural adaptation and validation. You can learn more about this process in the article published in the international journal Disability and Rehabilitation.