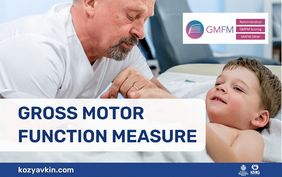 The test is intended for children aged 5 months to 16 years, whose motor development is delayed relatively to their age.

This test was developed by a team led by Dianne Russell at McMaster University in 1989, translated into many languages, and is one of the most common tools for assessing the patients with cerebral palsy. Translation into Ukrainian was performed by the team of the Kozyavkin International Rehabilitation Clinic. GMFM has demonstrated sufficient validity, sensitivity and reliability to assess the motor skills of children with cerebral palsy undergoing rehabilitation. There are 2 versions of the test: the original GMFM-88, which contains 88 items, and the newer version, GMFM-66, that contains 66 items.

A) lying and rolling,

0 means that the child does not initiate the task,

and 3 - fully completes the task. A five-year-old child with no motor impairment can complete all tasks for the maximum score.

At the end of the assessment, the total score for the development of gross motor functions is calculated, as well as the score for each of the categories - lying, sitting, crawling, standing and walking.

The GMFM test takes approximately 45-60 minutes to complete, this time depends on the examiner's skills, the child's level of development (the more the child can do, the more tasks need to be tested) and the child's cooperation. 3 attempts are allowed to perform each task. Before performing the test and using the scale, it is necessary to read in detail the description of the evaluation criteria for each task, which is given in the manual.

In 2003, a shorter version of the test was developed, called GMFM-66. Using Rash analysis, the authors identified 66 tasks that are the most informative. This test is performed similarly to the GMFM-88 test, except that it is necessary to distinguish between a score of "0" (the child does not try to complete the task) and a score of "NT" (not tested).

To calculate the overall score and analyze the results of the GMFM-66 test, the computer program Gross Motor Ability Estimator (GMFE) is used, which calculates the score of motor development of the child based on the scores obtained for each task. You can download this program for free by the link.

The choice of GMFM version depends on the purpose of the evaluation. The GMFM-88 test can be performed to assess a child's motor function using mobility aids, orthoses, or special footwear, while the GMFM-66 test requires the child to be barefoot. GMFM-88 provides more information about the motor functions of younger children and children with severe motor impairments, such as those in GMFCS level V, as it evaluates more tasks. GMFM-66 requires less time to complete because it does not include all tasks, it is used to track changes over time and assess progress after treatment and rehabilitation. It also has the advantage that the GMAE program can store and track changes in a child's motor functions over time, and that the program calculates statistics such as confidence intervals, percentiles, and standard error. It was determined that 13 is the minimum number of tasks that need to be performed to provide a correct score on the GMFM-66.

The authors of the test also had developed and validated GMFM-66-IS item sets, which are a good alternative to GMFM-66. They include fewer tasks than a full test, which reduces assessment time. At the same time, their results did not differ significantly from those calculated after the full test, so the item sets can be used instead of GMFM-66. The only condition is consistency in the choice of test - if GMFM-66/ a certain item set was used previously, then it should be used for all further assessments of that child. The first item set contains 15 tasks, the second - 29, the third - 39, and the fourth - 22.

Algorithm for determining which item set should be used for a particular child:

Detailed information about the test in English can be found here.

GMFM scoresheets and item sets could be downloaded from this page.