The aim of the current study is to evaluate an influence of the Spinal Manipulation on muscles spasticity and manual dexterity of patients with Cerebral Palsy.

Muscle spasticity was measured quantitatively in 29 patients with CP before treatment, after 1 spinal manipulation and after 2 weeks of treatment.

This study indicates that spinal manipulation may decrease spasticity of wrist muscles in patients with Cerebral Palsy. 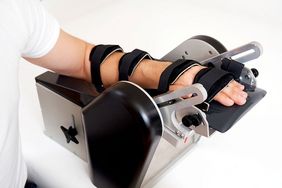 Muscle spasticity is a significant clinical syndrome of CP resulting from upper motor neuron lesions. Due to the limited efficiency of “traditional” spasticity management approaches, a wide range of complementary and alternative therapies are used for muscle tone management in patients with Cerebral Palsy, including spinal manipulation (SM).

Previous research describes decrease in spasticity after SM in a group of children with CP But that case series has no control group and the sample size was small so it does not prove the influence of the SM on the muscle spasticity [1].

The aim of our current study is to evaluate a short term influence of the Spinal Manipulation (SM) on the wrist muscles spasticity and manual dexterity in children with spastic Cerebral Palsy. Effect of SM and imitation of the SM has to be compared in the double-blinded randomized clinical trial.

Quantitative, instrumental spasticity measurement is preformed using the Neuroflexor device. It is measuring resistance to passive movements of the wrist performed with different speed and calculates components of muscle tone, separating spasticity as reflex phenomenon from resistance due to secondary changes of the muscles and tendons.

Manual dexterity is evaluated using Box and Blocks test. The score is the number of blocks carried by hand from one compartment to the other in one minute.

This study is registered in the ClinicalTrials.gov protocol registration and results system under the number NCT03005938.