The results of our latest research have been published in the article "Personalized balance games for children with cerebral palsy: A pilot study" in the Journal of Pediatric Rehabilitation Medicine in 2021. 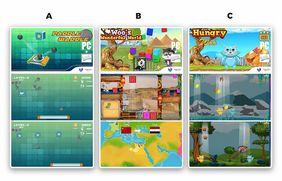 It presents the results of a pilot study of the effect of specially designed personalized computer games on the balance function in children with cerebral palsy. The study was conducted as a part of the project funded by the European Union's Horizon 2020 program.

Specialized computer games have been used to improve balance function that is commonly impaired in people with cerebral palsy. These games are controlled by the Nintendo Wii Balance Board, which determines the movement of the center of gravity of the player's body. To control the actions of the character the child moves in different directions, thus improving their movements. One can play in different positions: standing independently or with support, sitting, or standing on their knees.

To assess the changes in the balance function in children with cerebral palsy after 2 weeks of training with personalized balancing games, we conducted a study on a group of 25 children aged 5-18 years. During two weeks, all participants were given 8-9 game sessions, lasting 15-20 minutes, totaling 150-160 minutes.

The experimental group used personalized computer games, developed on the Horizon 2020 research project, which were available through the online platform GABLE. The children in the control group played Nintendo Wii games with the Wii Remote, which should be held in the player’s hand. Both groups received the same background treatment by the Kozyavkin method.

Patients were examined before and after a two-week training period. The results of the following tests were compared: Trunk Control Measurement Scale (TCMS) - a clinical tool for trunk control assessment in children with cerebral palsy, Timed Up & Go Test (TUG) - mobility assessment that requires both static and dynamic balance, Center of Pressure Path Length (COP-PL) - static balance testing and Dynamic Balance Test (DBT). COP-PL and DBT were performed using a balance board.

After two weeks of training in the experimental group, TCMS scores increased by 4.5 points (SD = 3.5, p <0.05), and DBT scores increased by 0.88 points (IQR = 1.03, p <0.05), while these scores did not change statistically significantly in the control group. Overall, TUG and COP-PL scores were not affected in either group.

The results of this study demonstrate an improvement in the balance function in children with cerebral palsy after a two-week course of training with personalized rehabilitation computer games.

You can read the article by the link.