This article is about tool for assessing spasticity in patients with CP and other conditions accompanied by increased muscle tone. 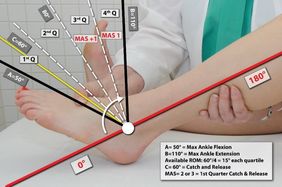 The Modified Ashworth Scale is a common tool for assessing spasticity in patients with cerebral palsy and other conditions accompanied by increased muscle tone. The original Ashworth scale was proposed in 1964, and a Modified scale - in 1987. The scale aims to assess the degree of the muscle resistance to passive movement in the joint with varying velocity.

Evaluation of test results is performed on a 5-point scale in the range from 0 - indicating no increase in tone, to 4 - which means that the limb is rigid in flexion or extension. To increase the sensitivity in the lower spectrum of measurements to the modified Ashworth scale was added category 1+, which means the presence of resistance for less than half of the amplitude of movement.

More information about the reliability and validity of the scale, as well as a bibliography can be found here.

You can watch short training video in English here.