The Pride of Truskavets 2017 Award

On January 20, 2018, the awards ceremony – Pride of Truskavets – 2017 – was held in Truskavets at the Rixos-Prykarpattya resort complex. 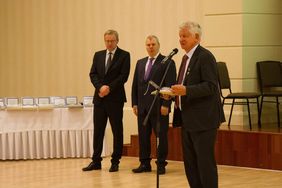 The award is presented as an annual prize, symbolized by the Crystal Lotus.

The prize was created by the Foundation for the European Integration of Ukraine, in co-operation with the Verkhovna Rada Committee on Family, Youth Policy, Sports and Tourism, and with the support of the Truskavets City Council.

The annual prize celebrates people and institutions that promote the city and resort of Truskavets, not only in Ukraine, but also abroad. The 2017 nominees were successful local public and political figures, athletes, businessmen, artists, hoteliers and restaurateurs. Independent and unbiased control over the selection of candidates was ensured by the Public Awards Council, which included respected Truskavets residents who have earned considerable reputation among the local population, led by historian Ivan Skybak.

MPs Mykola Velychkovych, Oksana Yurynets and Bohdan Matkivsky attended the event and personally congratulated the winners. Along with well-known Truskavets personalities, we would also like to mention the presence and support of the Bishop of the Sambir-Drohobych Eparchy Yaroslav (Pryriz), the Deputy Head of the Lviv Regional State Administration Rostyslav Zamlynsky, the Head of the Drohobych District Administration Volodymyr Shutko, as well as municipal officials and deputies. Foreign delegations were invited from Poland, namely representatives of Sanok County.

“I’m more convinced than ever that, thanks to the hard work of our employees, thanks to everyone’s contribution in their expertise area, Ukraine is beginning to be known and respected abroad,” said Professor Kozyavkin in his speech.