On November 4, 2017, the 7th Annual International Medical Conference Diseases of Society and Civilization was held in Przemyśl, Poland. 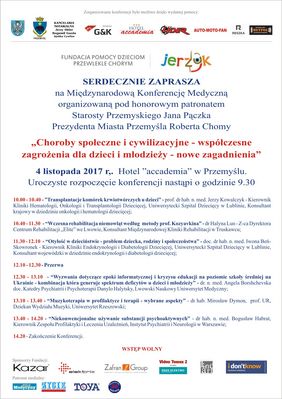 The Conference was organized by Jerzyk, a foundation for chronically ill children, under the patronage of the Prefect of Przemysl Jan Pączek and the President of Przemysl Robert Choma. Representatives of the delegation of the Elita Rehabilitation Centre (Lviv, Ukraine) were invited to participate in the conference. Halyna Lun, Deputy Director of Elita RC, Candidate of Medical Sciences, spoke on the topic of “Early Rehabilitation Using the Professor Kozyavkin Method”, a highly effective intensive rehabilitation system designed for at-risk infants, with analyses and demonstrations of specific clinical cases.

Interested persons, such as paediatricians, neurologists, family doctors, physiotherapists, nurses, midwives and other medical staff, who deal with many issues that were discussed during the conference on a daily basis, were invited to attend Mrs. Lun’s presentation.

In addition to the above-mentioned issues, the agenda included discussions that are extremely relevant for society, especially for the education of children and young people, namely on the topic of oncohaematology – “Transplantation of Hematopoietic Cells in Children,” described in detail by Professor Jerzy Kowalczyk, and the Professor of the Clinic of Paediatric Haematology, Oncology and Transplantology at the University Clinic of Lublin; “Childhood Obesity: A Challenge for Children, Family and Society.” These topics were presented by Doctor of Medical Sciences Iwona Beń-Skowronek and the Head of the Clinic of Endocrinology and Childhood Diabetes at the University Clinic of Paediatrics in Lublin; “Music Therapy for Prevention and Therapy,” which was presented by Dr. Mirosław Dymon, Dean of the Department of Music at the University of Rzeszów.

In addition, information on “Problems Related to the Information Age and Education Crisis: Example of Secondary Schools in Ukraine – Combinations That Generate a Spectrum of Deficits in Children and Young People” was presented by the Associate Professor of the Department of Psychiatry and Psychotherapy of Daniel of Galicia Lviv National Medical University. Bogusław Habrat, Doctor of Medical Sciences, Head of the Department for the Prevention and Treatment of Dependency at the Institute of Psychiatry and Neurology in Warsaw, talked about the “Non-Traditional Use of Psychoactive Substances.”