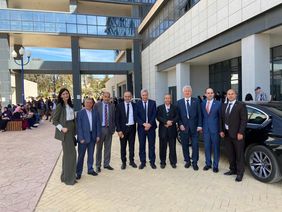 During the visit, on March 9, they had a meeting S. Abdelhafiz, Governor of the Constantine Province, and participated in a symposium focused on the Professor Kozyavkin Method with M.A. Subh, Ambassador of Ukraine to Algeria, and top health professionals of the region.

On March 11, an official meeting was held with Mr. Youcef Acheuk Fouad, Minister of Labour, Employment and Social Security of Algeria, and the Rector of Algiers 1 University and the Dean of the Department of Medicine. Considering that the Professor Kozyavkin Method generated a considerable interest, joint projects in the area of rehabilitation of children with disabilities were outlined for cooperation with both public institutions and public-private partnerships.

The next day, March 12, the international conference on the occasion of the World Day of Persons with Disabilities was held at Algiers 2 University. The Ukrainian delegation attended the conference as guests of honour at the invitation of the National Foundation for Health Progress and Research Development (FOREM) of Algeria. M.A. Subh, Ambassador of Ukraine to Algeria, and Professor Volodymyr Kozyavkin, Hero of Ukraine and President of Kozyavkin Medical Group, spoke at the opening of the conference.

The conference participants, including the Rector of Algiers 2 University, the President of the National Committee for the Protection of Human Rights, the Secretary General of the National Commission for the Protection and Development of Childhood of Algeria, had an opportunity to become acquainted with the specifics of the use of the Professor Kozyavkin Method for the rehabilitation of patients with various neurological diseases at Kozyavkin International Rehabilitation Clinic in Truskavets.

The conference participants further discussed ways to enhance cooperation in the implementation of joint research projects between top medical institutions and centres of Ukraine and Algeria.