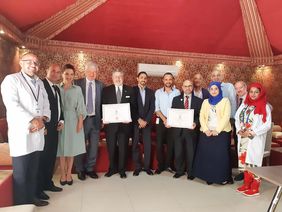 On June 23, 2019, in cooperation with our partners from Cambridge Medical & Rehabilitation Center was launched the second Professor Kozyavkin Method Treatment and Rehabilitation Centre in the United Arab Emiratesand will operate on the basis of CMRC facility in Abu Dhabi.

In the near future, it is planned to extend this rehabilitation to another 2 CMRC facilities, particularly in Dubai, UAE and eastern region of Saudi Arabia, Dhahran city.

Let us recall that the INRS in December 2017 was officially recognized at the state level in the UAE, which means that the state of United Arab Emirates fully covers the treatment under Professor Kozyavkin method for its citizens with cerebral palsy.