The Conference of the European Academy of Childhood Disability in Amsterdam

A working visit to India

From March 20th to 26th, a delegation from the Clinic visited India on a working visit, during which delegates met with the Deputy Minister of Health of India Sanjeeva Kumar in Delhi.

Study of the Influence of Spinal Manipulation on Muscle Spasticity

Randomized clinical trial of the Influence of Spinal Manipulation on Muscle Spasticity was registered in international register of clinical trials ClinicalTrials.gov

As a member of official delegation, Professor Volodymyr Kozyavkin was invited for the World Innovation Summit for Health held in Doha, Qatar.

Investigation for development of the rehabilitation computer games for the children with cerebral palsy was awarded with the grant by European Commission within Framework Programmes "Horizon 2020".

At the invitation of the medical community and parents of patients, a delegation of International clinic of Rehabilitation, led by Professor V. Kozyavkin visited Damam (Saudi Arabia) from 27 September to 1 October 2016. 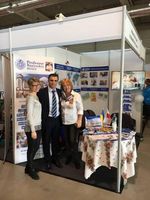