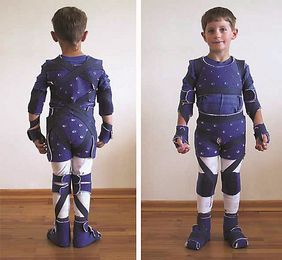 While seeking new approaches to the rehabilitation of patients with motor developmental delay we utilized the achievements of a relatively new science – integrative anatomy and physiology. One of the directions of this science is the study of the functional interplay (coordination) of the muscles during the movements. It was demonstrated that for the optimal performance of movement, the muscles are united into different types of groups - longitudinal muscle groups, muscle pairs (which have been traditionally influenced in CP rehabilitation) and spiral muscle groups.

We placed our emphasis on the spiral muscle groups which are important for compound movements. These movements not only involve one body segment but require coordinated (concordant) position and movement of the trunk and extremities. Spiral muscle groups cross the body from one side to another and join the left and right side as well as the upper and lower part of the body. They ensure bilateral symmetry and proper posture of the body in the field of gravity; crossed coordination of the upper and lower extremities during locomotion (walking, running, jumping), shock-absorption during movements and many other important functions.

Spiral muscle groups support the spine, secure the head position during movements, support physiological spinal curves, take part in the movement of the thorax during respiration and provide a stable position of the body and extremities. 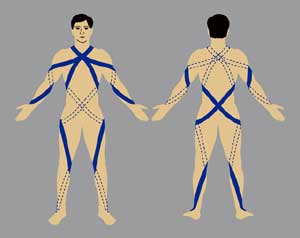 In addition, we followed with interest the studies done under supervision of Prof. Ksenia Semenova in the Pediatric Research Institute of the Russian Medical Academy in Moscow. These studies determined that appropriate proprioceptive information is a key precondition for brain development and worked out the basics of the movement correcting influences of proprioception.

The first suit utilized for the correction of movement in patients with CP was the modified suit known as the “Penguin”, created in the 70’s for the prevention complications due to weightlessness in astronauts. Elastic straps set into the space-suit provide an additional load on the muscles and partially reconstitute the influence of the field of gravity. In the 90’s the “Penguin” suit was modified and adapted for patients with CP and received the name “Adeli” suit. This suit has been constantly improving and by the end of 90’s a new suit, “Gravistat”, was created which exerts greater influence on the movement and reflex responses of CP patients. Movement correction utilizing the “Spiral” suit applies additional exertion to certain joints and corrects the position and movement of the trunk and extremities. In addition, the flow of “correct” proprioceptive information to the central nervous system is enhanced. The absence of the rigid parts in the suit significantly broadens the range of possible physical therapy exercises. System of elastic straps consists of an axial spiral, main extremity spirals and supplemental correction bands (straps).

The Axial Spiral is one of the central components of the suit. It is aimed at correction of the position and movement of the trunk, shoulder and pelvis girdle. The axial spiral is attached to the vest and shorts and all its modifications are built as different figure-of-eight [cross] bandages. 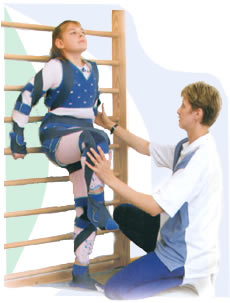 The correction “Spiral” suit is used to enhance remedial gymnastic exercises, mechanotherapy, treadmill training, training with play therapy devices, and plain movement activity of the child. Multiple repetitions of the correct movement assist in the development of new pathways within the nervous system and facilitate use of these proper movement patterns in the future. Proper external forces applied by the suit, and the diversity and repetition of the exercises assists in a gradual formation of the new movement patterns.