Government delegation from the Sultanate of Oman

On August 15-16, an official government delegation from the Sultanate of Oman visited Kozyavkin International Rehabilitation Clinic. 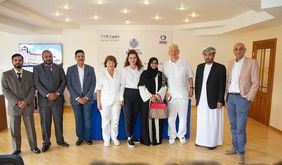 On August 15, guests had the opportunity to listen to the report of Deputy Director for Medical Affairs Mychailo Gordievych, who explained in detail the main aspects of rehabilitation, and later to see the entire process of patient rehabilitation according to Professor Kozyavkin Method as well as to talk with patients.

The next day, the working group was joined by the head of Innovative Technologies Department Oleh Kachmar and researcher Anna Kushnir, who had the opportunity to describe the main research directions and share recent developments of a scientific team of the clinic.

During the meeting, it was agreed that in the near future will be scheduled for the next working meeting and it may be the beginning of long and fruitful cooperation.