Meeting with Partners in Saudi Arabia 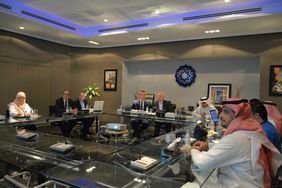 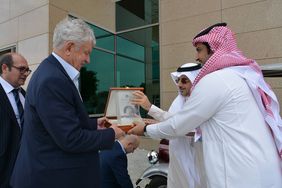 The first scheduled meeting was held with Mr. Awad Al Ghamdi, General Director of the Disabled Children’s Association in Riyadh on November 21. This meeting was preceded by another pleasant and productive event in our cooperation plan – a pilot visit by our guests from the Middle East to the International Clinic of Rehabilitation in Truskavets. Two months ago, in mid-September, a delegation of medical rehabilitation professionals and physiotherapists from the Ministry of Health of the Kingdom of Saudi Arabia had the opportunity to get directly acquainted with Professor Kozyavkin’s innovative method – a highly effective technology for treating patients – and appreciate first-hand our medical personnel’s high level of healthcare qualifications and the latest technical equipment used in our medical institution.

The interest of foreign doctors in further cooperation with their Ukrainian colleagues is evidenced by the fact that less than two months after their visit, we received an invitation to Saudi Arabia to discuss ways of helping children with musculoskeletal disorders. Thus, Professor Kozyavkin had the pleasure of communicating with the management of the largest private hospital in Saudi Arabia in the course of his working visit. First of all, not only does this medical institution impress with its large scale – one million hectares – but also with its state-of-the-art equipment and excellent conditions for hospital stay

Mr. Abdullah Bin Sarah, hospital CEO, expressed his expectations for establishing close cooperation with his Ukrainian colleagues. The members of the delegation headed by Professor Kozyavkin were impressed not only by the scale of the facility established in 2002 as a rehabilitation hospital and medical centre with 462 specialized beds, but also by the quality of technical resources and professional attitude of the medical staff employed in this non-profit project – the largest rehabilitation institution in the Middle East – initiated by the Sultan Bin Abdulaziz Al Saud Foundation

During the meeting, both sides repeatedly expressed the desire for further cooperation as we work towards one common goal – the provision of modern services based on international rehabilitation standards to both children and adults using the latest medical technologies.

Saudi Arabia has launched a reform plan called Vision 2030, where one of the key issues is to reform the medical sector by bringing the best practices and treatment methods to the country. As the Professor Kozyavkin Method is considered one of the most promising in the field of rehabilitation and has produced real results, both sides hope that this visit will lead to a deeper and more effective cooperation between our two countries.