The professor Kozyavkin Method launched in the UAE 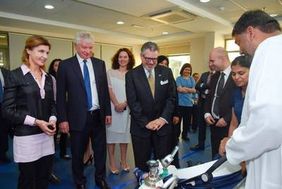 The project was inaugurated with the collaboration of a major international partner – the Cambridge Medical and Rehabilitation Center, one of the leading medical rehabilitation facilities in the United Arab Emirates. The CMRC Medical Group operates according to American standards, and currently has affiliates in Al Ain, Dubai and Abu Dhabi.

As part of the project, the First Lady of Ukraine, Maryna Poroshenko, visited the Cambridge Medical Center in Abu Dhabi on November 2. Mrs. Poroshenko, who is a cardiologist and candidate of medical sciences, noted the importance of the social aspect of this collaboration and promised full assistance to the project, which is aimed at helping children and raising the image of Ukraine on the international scene. The center will specialize in helping children suffering from cerebral palsy and other chronic neurological pathologies.

Howard Podolski, head of the Cambridge Medical and Rehabilitation Center Group stated that he was very pleased to work with Prof. Kozyavkin and talked about the lack of similar technology in the treatment of cerebral palsy. Mrs. Poroshenko visited with the clinic, and was introduced to the working conditions, equipment, therapeutic exercise rooms, and the intensive care ward; she also communicated with several patients and noted the high level of organization in the center.

On November 3, this joint project was officially presented at the International Conference on Medical Rehabilitation at the Mena Physical Medicine and Rehabilitation Congress held in Dubai. Professor Volodymyr Illich Kozyavkin spoke about the methodological basics, treatment effectiveness, and the actual implementation of the project. His report aroused considerable interest among representatives of the medical sector, that is, more than 400 participants.

The next two days, namely November 4 and 5, were dedicated to selecting patients for the first rehabilitation course. There were five times more patients wishing to attend rehabilitation sessions using Prof. Kozyavkin’s Method than initially planned, so it is only a matter of time before the next branch opens in Abu Dhabi.