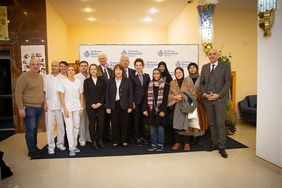 On November 28-29, a delegation of medical rehabilitation and physiotherapy professionals from the Ministry of Health of Kuwait, including Dr Aziza Alazemi,  Dr Laila Husain, Dr Ibtesam Alwazzan, Dr Fager Alabdulhadi,   visited the Kozyavkin International Rehabilitation Clinic to get acquainted with Professor Kozyavkin innovative method as a highly effective technology for treating patients.

Vivus Medical Rehabilitation Company Ltd. will bring The Kozyavkin Method – a specialized intensive rehabilitation program for patients with Cerebral Palsy (CP) and other disorders of the central nervous system (CNS) – to international markets across the Middle East, Southeast Asia, Europe and North America.For that and with the aim of establishing specialized rehabilitation clinics in Kuwait that will care for CP patients using the internationally accredited “Kozyavkin Method”, VMRC organised a Workshop in Truskavets and with the support of the Embassy of Ukraine in Kuwait, to officially announce the planned introduction of the “Kozyavkin Method” to Kuwait.

On November 28, guests had the opportunity to listen to the report of Deputy Director for Medical Affairs Mychailo Gordievych, who explained in detail the main aspects of rehabilitation. Later the members of delegation met with representatives of the scientific department of the clinic to discuss in detail the rehabilitation system, evidence base and current research conducted by the scientific team of the medical center.

The next day, a delegation from Kuwait had the opportunity to get directly acquainted with Professor Kozyavkin innovative method and appreciate first-hand medical personnel’s high level of healthcare qualifications and the latest technical equipment used in the medical institution. Also, during the clinic tour, guests had the opportunity to interact and get feedback from Kuwaiti patients that are currently in rehabilitation in the Clinic.

This  event is a major milestone in an effort to improve the quality of care for CP patients in Kuwait in line with the strategic initiatives set under the New Kuwait 2035 National Development Plan and builds on similar practices in the United Arab Emirates and soon in the Kingdom of Saudi Arabia.