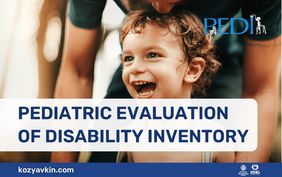 PEDI can also be used for older children whose functional abilities are lower than those of 7-year-old children without disabilities. PEDI assesses the functionality, independence, and need for the modifications to perform functional activities.

Its first version was developed in 1992 by a group of authors from Boston University. The questionnaire was designed to assess the child's daily activities, not to describe structural lesions and functional disorders.

The main part of the questionnaire is the Functional Skills Scale, which allows to assess the effectiveness of the child's functioning in three main areas: self-care, mobility and social functioning. The scale consists of 197 questions:

Each question is described with an explanation of the criteria for its success, which should be read in detail. The questionnaire is completed by interviewing parents or other caregivers who have been observing the child for a long time. Parents/ guardians can fill in the questionnaire and analyze the results of their own child. The assessment by an experienced specialist takes about 20-30 minutes.

In addition to the main Functional Skills Scale, the developers have created two additional scales: the Caregiver Assistance Scale and the Modifications Scale. The Caregiver Assistance Scale is designed to determine the usual amount of assistance provided to a child during basic functional activities and consists of 20 questions, of which 8 relate to self-care, 7 to mobility, and 5 to social functions. The questions of the scale are evaluated on a 5-point scale. The Modifications Scale also consists of 20 questions and is used to determine the number of functional activities for which modifications are required, it is assessed by four degrees.

The summarized scores are converted into standardized according to the chronological age of the child using the tables (in Annexes IV and V of the Manual). The results are interpreted relative to 50 centiles with a standard deviation of ± 10. They provide an overall assessment of a child's functional abilities compared to peers.

Scale scores can be calculated for each section of the Functional Skills Scale and the Caregiver Assistance Scale. They range from 0 to 100. These scores do not compare the child with peers, but rather describe the child's functionality in relation to the maximum score. They are used in two cases: 1) if the assessed child with severe developmental delay is older than 7.5 years; 2) to track the development of the child in the dynamics.

In October 2012 in order to facilitate the work with PEDI and create a single unified database was developed an electronic version of PEDI– PEDI-CAT.

PEDI is today a universally recognized global standard; its validity and reliability have been tested in many studies. The questionnaire has been translated into 25 languages of the world and adapted to the cultural and ethnic features of the different regions of the world.